What does it take to full development?

WEF’s country report 2015 / 2016 puts Chile in the 35th position in the competitiveness ranking worldwide (140 countries).  Even though Chile is 2 positions below in the ranking compared to 2014, Chile still leads in the Latin American region. This is due to variables such as “solid institutions (32nd), a stable macroeconomic environment (29th), well-functioning financial markets (21st), high technological readiness (39th), and widespread uptake of ICTs (47th)”. 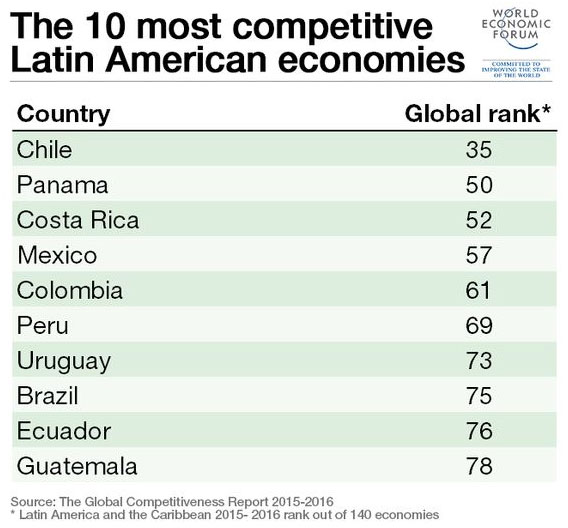 WEF’s country report puts Chile on a transition to development together with 19 countries. Therefore, the question would be: what does Chile need to jump into full development?

According to WEF, the emphasis should be on innovation drivers, hence problematic factors impeding to jump from transition are related to “long-standing issues such as its education system, specifically the overall quality of primary education (108th) and math and science education (107th). Higher education and training is in much better shape (33rd), but Chile must do more to improve its capacity to innovate (85th) in areas such as R&D (92nd) to diversify and foster robust growth”.

According to WEF definition, competitiveness is the set of institutions, policies, and factors that determine the level of productivity of a country, hence the emphasis on productivity is key to understand the country’s prosperity. Therefore, higher productivity translates into competitiveness which by definition is the pace at which countries continue to perform in a given a period of time regardless of external pressures or forces. 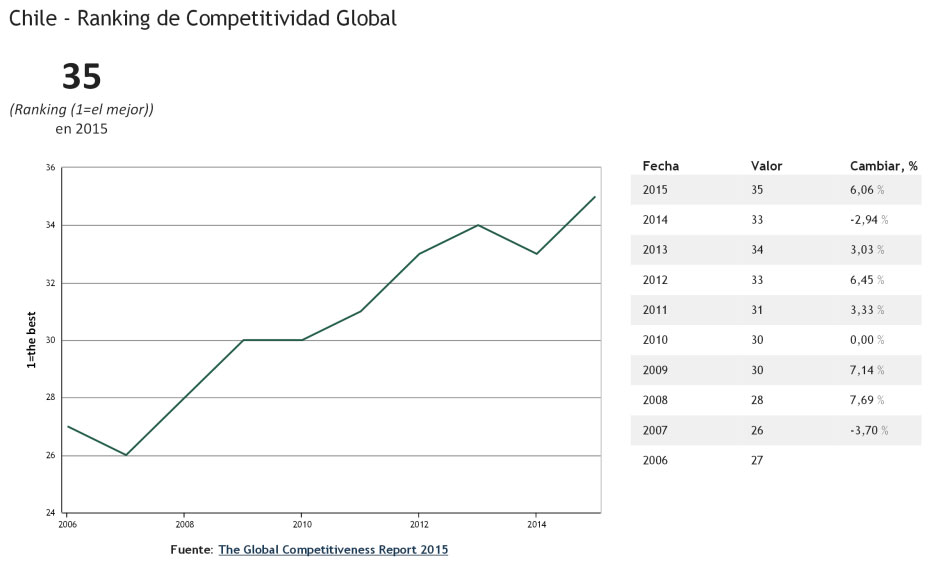 The competitive edge that Chile needs to pull is connected with the mechanisms by which the country can invigorate its educational system. Not only equity-related but most importantly quality-driven. According to WEF country report, 2015/2016 the most negative variables for doing business in Chile are a) inadequately educated workforce and b) insufficient capacity to innovate. For 25 years, China’s demand for raw materials, in particular, Chilean copper clouded any critical view on poor educational variables. Those measures were given to authorities as warning signs by WEF in previous reports, but concern over education performance did not materialize in public policy until the end of a political cycle which culminated in social mobilization by 2011 to demand an end to “disparities” (OECD Country Report 2013, 2014, 2015). For 25 years, Chile focused on macroeconomics to hit growth targets. The strategic significance of educational variables did not surface the political landscape during the 25-year-political cycle that gave Chile governance and stability. In a new electoral cycle (2013) demands from students’ leaders were incorporated in the power sphere and the Government presented a second generation reform on education and a tax reform to support it. Second generation reforms have emerged as the necessary tool to bring Chile into “inclusive growth” (OECD Country Report 2012, 2013, 2014, 2015) and have been deemed strategic by international organizations where Chile is a fully-fledged member (OECD, IMF, WB). As a result, new legislation to reinvigorate the teaching profession, penalize profit and discriminatory enrollment at the school and warrant free education at tertiary level to pre-graduate students coming from the lowest socio-economic quintiles in society is under way. It is expected that by introducing policies aiming at inclusive growth, Chile may overcome the great disparities observed by OECD. However, there is much homework to do in regards to quality standards and the necessary synergies between private companies and educational bodies towards skills and productivity to reach the global chain of added value. Universities play a fundamental role and new legislation must press hard on high-quality standards and public-private initiatives on R&D.  More governmental investment must be injected into investigation projects. Chile is on the transition to a knowledge-based society and faces the challenge of overcoming the middle-income trap” whereby countries get stuck by an extractive economy without any room for value added products due to poor innovation.

According to WEF country report 2015 /2016 “Chile must do more to improve its capacity to innovate (85th) in areas such as R&D (92nd) to diversify and foster robust growth”.

Over the next 2 remaining years, Bachelet’s government will be tested over the institutional ability to produce efficient public policies. Technological development in Chile is on the right track. According to WEF IT Report 2015, Chile leads in ICT’s in the Latin America and the Caribbean region.

Extractive economies run the risk of overconfidence in their exports of raw materials. Overconfidence in copper exports may cloud long term vision on valued added products, a more diversified matrix and the strategic importance of innovation. R&D is key to shield an open economy like Chile to external shocks and the geopolitics of China’s slowdown. Inclusive growth without attention to high-quality standards in education cannot solve the issue of poor educational variables per se. More is needed on primary education and investment on R%D. Greater incentives are needed to boost public-private synergies on technology, patents, and research. Greater incentives for universities to create research centers are required. Necessity to align all actors around innovation-driven factors to hit development targets and overcome the threat of the “middle income trap” in extractive economies.

Against the backdrop of economic slowdown, a fall in copper prices and an appreciated dollar, Chile has an opportunity to design efficient policies to improve its educational system, namely to create a better educated workforce able to innovate. Opportunity to legislate on high quality standards at tertiary level. Opportunity to reform education at primary level, especially for low income families. Opportunity to align all actors (entrepreneurs, politicians and civil society) on a common goal with a long term vision to hit development targets. Opportunity to overcome “disparities” observed in the economic model (OECD, Country Report 2013, 2014, 2015). Opportunity to legitimize second-generation reforms as necessary tools to jump into full development by means of higher productivity.